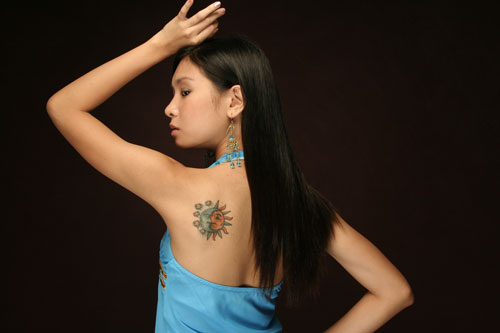 Humans have been tattooing their skin for thousands of years, and in recent years tattoos have become a highly artistic form of self expression and decoration. Tattooing involves injecting ink using small, fine needles deep into the skin. This article explains how tattoo ink, once it is injected, stays in the skin permanently.

WHAT’S IN THE INK?

Tattoo inks are composed of the coloured pigment and a carrier solution. The pigments are made from a range of sources, from plant-based dyes, to manufactured chemicals or dyes derived from metals (such as iron, cobalt, cadmium or zinc). The basic property they all have in common is that they do not dissolve in water, which makes them difficult to remove from the body, and one of the reasons why tattoos are permanent.

ANATOMY OF THE SKIN

The skin is composed of three layers:

The cells in the epidermis are continually replaced as those at the skin’s surface die and fall off, at a rate of about 40,000 cells per hour. If the tattoo ink was injected into the epidermis, it would eventually disappear as the cells die off to make way for new cells. To make tattoos permanent, tattoo needles punch holes past the epidermis and into the dermis.

Punching holes into the dermis creates a local inflammation. The inflammation signals the body to send cells called macrophages, which are part of the body’s defence against infection, to the injection site. Macrophages ingest the ink, which they see as a potential ‘invader’. Most of the macrophages leave the injection site, removing the ‘invader’ pigment, but many remain behind. Other ink particles float free in the gel-like matrix of the dermis, and still more ink is absorbed by the skin cells (fibroblasts) in the dermis. The ink that remains in the cells of the dermis and in the dermal matrix is visible on the skin’s surface. Over time, some of the pigment will be broken down and removed by the body’s natural detoxification processes and the tattoo will fade, but most will stay where it was injected permanently.

NOT ALL TATTOOS ARE CREATED EQUAL

The difference between ‘artistic’ tattoos, performed by a tattoo artist with specialised tattoo equipment, and medical or ‘cosmetic’ tattoos, which includes removing permanent makeup (for the eye, eyebrow or lip) is that cosmetic ink is injected at the border between the epidermis and the dermis. Enough of the ink is taken up by skin cells that are destined to move up through the epidermis and eventually die and fall off, that the cosmetic tattoos fade considerably over a few months.

Tattoos have evolved from simple black symbols to complex, multi-coloured works of wearable art. While cosmetic tattoos are designed to fade over time, artistic tattoos are intended to be permanent. However, medical lasers use the chemical properties of the pigment in tattoo ink to attract the laser energy, breaking the pigment down without damaging the surrounding skin.

Laser tattoo removal Sydney provides a safe and effective option for anyone considering removing or fading their tattoo. If you are interested in talking to Eden Tattoo Removal, Sydney about your tattoo, you can call us on 02 8020 5819 or book a tattoo removal appointment online.