But is this actually the case?

In this article we compare both options (old technology vs new technology), not on the cost per session, but on the total cost to remove your tattoo to give you the true price – the price for the result. See the calculations at the end of this article, you will be surprised!

WHAT’S THE DIFFERENCE BETWEEN PICOSECOND (THE PICOWAY) AND NANOSECOND?

The PicoWay laser is a new generation, FDA approved medical laser that acts in a similar way as traditional lasers. It sends laser energy into the skin which is absorbed by the pigment in tattoo ink, to shatter the ink into smaller particles which your body then removes.

The major difference between a Nanosecond (eg. Q-switched laser) and the PicoWay laser system is the speed at which each device delivers energy. The much faster speed of the PicoWay results in faster removal, with less pain and faster healing/ recovery time.

WHAT ARE NANOSECOND DEVICES?

Every time you talk to a tattoo removal clinic, you should be asking what laser device or machine they use. If they list their device as a Q-Switched ND:YAG, you need to ask the brand or manufacturer of the machine, a Q-Switched ND:YAG could be a $4,000 second hand Chinese import or a $60,000 branded device. If they won’t tell you then you should walk out the door.

There are now three Picosecond devices, the PicoWay, the PicoSure and the Discovery Pico. There is more information further on in this article as to why EdenTattoo Removal chose the PicoWay over the PicoSure (it was a pretty easy decision).

If a tattoo removal clinic doesn’t say if they have Nanosecond or Picosecond, here are some of the many Nanosecond or Q-switched ND:Yag devices/ machines in Sydney:

At Eden Tattoo Removal, Sydney’s laser tattoo removal specialist, we have been removing tattoos in Sydney for over 5 years. We started with a Nanosecond device called an ATV (Alex TriVantage laser).

In 2014, we began discussions to purchase a Picosecond device. The reason we wanted to upgrade was because of the pain we saw in our clients during tattoo removal on the Nanosecond device and the amount of treatments it took to remove or fade a tattoo. The other major reason was the recovery time or the time between treatments. 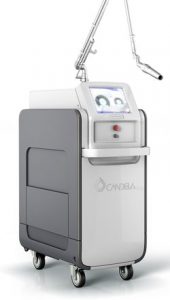 When we were selecting a Picosecond device, we went with the PicoWay for three main reasons:

THE COST OF LASER TATTOO REMOVAL – TO REMOVE YOUR TATTOO

To make this calculation easy we will consider removing a medium sized, black tattoo that is 50cm2 (roughly 10cm by 5cm) filled in, not just the outline of the tattoo. We will be comparing:

These figures were accurate at time of publishing this article.

There you have the calculations. The cost of the result with PicoWay is $112 less and you save 58 weeks (more than a year faster!) with significantly less discomfort than the painful option of a Nanosecond laser.

At Eden Tattoo Removal, we guarantee that the most you will ever pay for is 10 sessions. We also have a price match policy and payment plans available.

WHAT ELSE DO I NEED TO CONSIDER?

What you will also need to consider is that your tattoo may not be totally removed after your 15 sessions with a Nanosecond laser. At Eden Tattoo Removal we regularly have people come to us because their tattoo has not been completely removed and they require PicoWay removal sessions.

The cost difference between Picosecond tattoo removal (PicoWay Laser) vs older style, nanosecond lasers has always been a talking point and for the majority of people, it is assumed that Picosecond tattoo removal is wildly more expensive, however this is not true as we have just shown above. The reason it has been a talking point is because tattoo removal providers advertise in single removal session prices, or sell in lots of 4, giving the assumption that your tattoo will be removed in 4 sessions. As you can see above, this is not the case.

Cost should be just one factor when comparing laser tattoo removal providers. Think of the cost and time wasted for all those additional sessions, as well as getting to and from the clinic.

Pain is also another major difference between the PicoWay and a Nanosecond device.

One enquiry we received said:

“I have had [NanoSecond] tattoo removal 3 times already but the pain was so intense that I couldn’t go on as I started to feel unwell wanting to vomit and passing out I have been reading about this PicoWay how is the pain associated with that?”

Because the PicoWay generates mainly photo-acoustic energy, it does not have the pain associated with other devices that produce mainly photo-thermal (heat). For someone like the above enquiry, this may only be believed once they come in for a free consultation and can have a test patch done to see how it feels.

An important distinction to make when it comes to pricing is that there are operators in Sydney offering $80 per session for tattoo removal. One of the big problems within the tattoo removal industry is the lack of regulation. There is nothing stopping a clinic buying a cheap $6,000 tattoo removal device from China and starting to use it, vs a PicoWay that costs over $300,000 and is FDA approved.

When comparing providers for laser tattoo removal, you should be considering all of the following:

Give us a call on 02 8020 5819 or click on one of the buttons below to ask a question or book a free consultation online now.