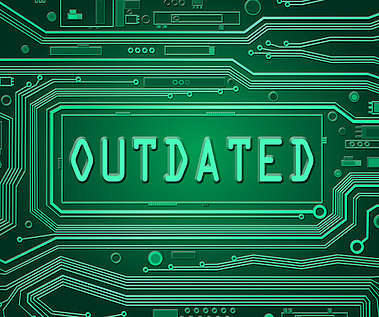 To understand the how fundamentally different the two technologies are, you need to understand what the terms “nanosecond” and “picosecond” mean. Nanosecond and picosecond are simply a measure of time, more specifically the measure of a fraction of a second.

Therefore, picosecond is 1000 x faster than a nanosecond. The speed of how fast a laser is fired determines how much force it can generate due to the shockwave effect. Just like a whip, the shockwave generated with the picosecond laser can shatter ink pigment into minuscule particles. Nanosecond laser is 1000 x slower and depends on heat to disrupt the ink pigment, leaving larger particles.

A picosecond laser can shatter the ink pigment into minuscule particles meaning the immune system can be more efficient in carrying away the particles. Macrophages are the pac-man of the immune system that engulf any pathogens like tattoo ink. The pigment needs to be small enough to be carried away through tissue and blood system and excreted in the waste system. Nanosecond laser leave larger ink particles which mean the macrophages have trouble removing the ink from the tattoo sites in the tissue.

A picosecond laser fires the laser at such a rapid rate (trillionth of a second) the laser creates a shockwave. The shockwave is doing the shattering like a whip. There is next to zero heat as the laser doesn’t have the time to stay on the area to generate heat. This means the picosecond laser is photo-acoustic.

A nanosecond laser fires the laser at a slower rate (billionth of a second) and is using mainly heat to disrupt the ink. The laser heats the ink and the surrounding tissue to break up the pigment. This means the nanosecond laser is photo-thermal.

The difference in heat is a very important factor in the efficiency of tattoo ink clearance and also trauma on the skin tissue. 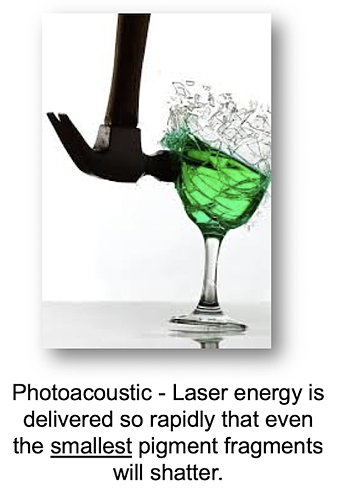 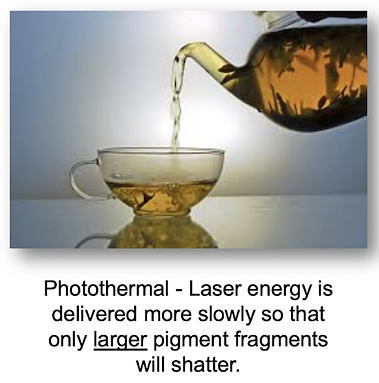 Due to the lack of heat (photo-acoustic) with picosecond lasers, clients are able to reduce the intervals in between tattoo removal sessions to 4 weeks. Nanosecond laser is all about using heat (photo-thermal) which means the client needs 8-10 weeks recovery between treatments. When the tattoo has been treated with so much heat, the tissue needs much more time for complete healing before you can perform another treatment.

All the factors listed above contribute to the picosecond laser requiring less treatments.

On average, black tattoos are cleared in 6-8 treatments.

Nanosecond lasers require any number from 15+ treatments. We have seen many situations where the tattoo is not cleared at all.

Total treatment cost with the Picosecond laser works out cheaper in the long run due to fewer treatments required.

Nanosecond laser operators advertise cheaper individual treatment costs but because the treatments can take 15 treatments, the total cost in fact works out much more expensive. 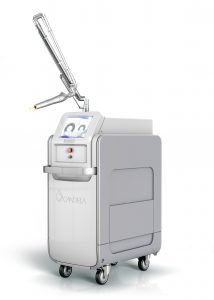 At Eden Tattoo Removal we upgraded from our nanosecond laser 4 years ago. We had the ability to purchase any of the available systems, but we chose to invest in the PicoWay for the following factors.

At Eden Tattoo Removal, we are specialists in tattoo clearance with the best laser technology. Please call (02) 8020 5819 to book your free consultation or click the button below to book online.